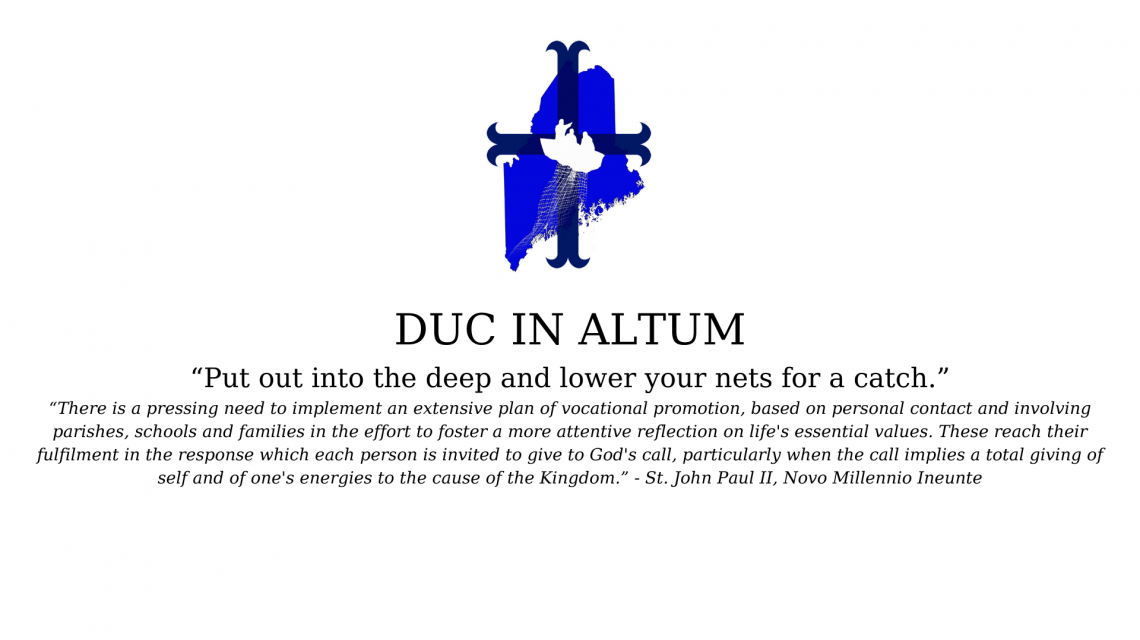 The Diocese of Portland: A Large and Rural Diocese with a Long and Distinguished History of Priestly Ministry.

In the first years of the Catholic faith in Maine, small pockets of Catholics were ministered to by religious missionary priests who traveled great distances in order to care for their spiritual needs.  With the great influx of French and Irish Catholics beginning in the mid-1800s, a new era began.  The Diocese of Portland was established and a sizable presbyterate was built up to minister to the many newly erected parishes throughout the state.  Priests enjoyed a great deal of social privilege and respect and hundreds were ordained in the 1930s, 40s, 50s, and 60s.

In the 1970s, two major challenges began to confront the Church in Maine: the economic vitality of the largest Catholic population centers throughout the state was dealt a severe blow as mills closed and military bases were shuttered, and religious orders who had staffed Catholic schools throughout the state began to pull back from rural areas due to decreased numbers within their orders.  Catholic schools were closed by the dozen and Catholic young people and young families began to move out of state to find work. Over the next two decades, the number of Catholics in Maine, which had rapidly risen until 1970, flat lined.  In addition to these socio-economic factors, there was a great deal of post conciliar confusion as to the role and ministry of the priest in the 80s and 90s, which made discernment more challenging.  The number of men entering the seminary dropped to barely a trickle.

The true seriousness of the situation began to manifest itself in the 90s.  The abnormally large ordination classes of the 40s, 50s, and 60s began to retire and were not being replaced.  In January of 2005, the diocese embarked on a 10 year pastoral plan, “Telling Anew the Story of Jesus,” working to consolidate parishes and absorb priestly retirements while maintaining critical sacramental ministry.

“Telling Anew the Story of Jesus” projected that the number of priests in active ministry would bottom out at about 60 in 2010, and would stabilize at between 60 and 65 active diocesan priests.  This projection was based on what was considered the reasonable expectation of two men being ordained each year for the diocese.

The Challenging Future of Priestly Ministry in Maine

Unfortunately, the last 10 years have not seen the stabilization in the number of active priests that “Telling Anew the Story of Jesus” predicted.  Only half the projected number of men have been ordained during the last 10 years, and currently there are only 4 men in formation for the diocese of Portland, meaning that the number of ordinations over the next 5 years will fall well short of what is needed to sustain a presbyterate of 60 active priests.

While every vocation is a gift from God, in recent years the Church has been able to identify key factors that help men and women hear and respond to the call to the priesthood and religious life.  Many of these factors lie beyond the ability of a vocations office to address, such as the Catholicity of the culture, the health of the family, the socio-economic environment, or other demographic and spiritual factors.  Yet it is critical that the vocations office accurately take account of the current pastoral reality, so that it can accurately identify the specific areas where efforts to foster vocations can be fruitful.

The current situation in Maine is today presents a number of challenges to the promotion of a culture of vocations:

Potential for a Strong Vocations Program

Despite the daunting challenges presented by our time, there is reason to be hopeful about vocations in Maine as we look to the future.  In a small diocese, only a relatively small number of men in formation is needed.  As we look toward the future, there is great potential to build up a strong culture of vocations and to gradually increase the number of men in formation for the diocese.  This potential is manifest in:

Looking at the current pastoral environment, it is clear that immediate and aggressive efforts are needed on multiple fronts with regard to the promotion of religious vocations.  No two religious vocations are the same, but recent studies by the NCDVD and CARA, among others, have helped identify best practices in promoting vocations today.

Prayer: Though there are not specific studies, it has been observed in the life of the Church that where there is a culture of prayer for vocations and great devotion to the Eucharist, there are strong numbers of men who enter the seminary or religious life.

Specific Age Groups:  There are particular stages in life when boys and young men are most open to considering a vocation to the priesthood: 11 years old, 11th grade, 3rd year of college, and 3rd year after college.

Personal Relationships: Certain relationships are critical in determining whether a young man will be able to discern and respond to the call to the priesthood or religious life.  Most important are relationships with:

Formative Experiences: A vocation is discerned within a community and must be supported and nurtured through various experiences of God that are shared with others.  There are particular experiences that have been identified through studies as beneficial to a young person’s ability to discern a call to the priesthood or religious life:

Communications Media: Outreach to those who are discerning is critical, providing them with ways to interact with others who are discerning, learn more about discernment, deepen their knowledge of the faith, and be spiritually enriched.  Important areas of outreach include:

Objectives of A New Strategic Plan to Strengthen Vocations in Maine

Based on identified best practices and taking into account the current challenges and potential areas for growth in our diocese, the Office for Vocations will implement a new strategic plan, titled “Duc In Altum” with the goal of accomplishing the following objectives:

For Men Actively Discerning a Vocation to the Priesthood:

For Those Who Are Open To Discerning a Religious Vocation:

For Parents, Grandparents and Other Members of the Catholic Community:

For the Larger Community:

In carrying out the work of promoting vocations in the Diocese of Portland, the Office of Vocations will proactively work to increase collaboration with Catholics from across the state.  Primary areas of collaboration are envisioned as follows:

The Director of Vocations will work to ensure that all efforts to promote vocations within the state are carried out according to the wishes and guidance of the Bishop.  Through regular communication with the Moderator of the Curia and the Bishop’s Office, the Vocation Director will work to ensure that the Bishop is aware of vocations efforts and is as involved as possible in those efforts.

The Director of Seminarians

The Vocations Director will be in regular (weekly) communication with the Director of Seminarians about ongoing efforts and progress in assisting those in discernment, in addition to any challenges and questions that come up in the course of ministry.  The Director of Seminarians will also determine the involvement of current seminarians in the work of building vocations throughout the year and particularly during the summer, collaborating in carrying out various vocations programs and events.

Priests of the diocese will be asked to serve as spiritual directors for men discerning a vocation and to agree to attend weekly discernment meetings in their region whenever possible, to be present at vocations retreats as time allows, and to nurture a culture of vocations in their pastoral ministry.

Throughout the year and particularly during the summer month, seminarians will be invited to help with the work of promoting vocations by giving talks, writing pieces for bulletins, web page, Harvest, and newsletter, and by working on retreats and discernment gatherings.

A Diocesan Vocations Council will be formed to work with the Director of Vocations to help foster and promote vocations to the priesthood and religious life in Maine, with particular attention to vocations to the priesthood.  Primary task: to advise the Vocation Director in current efforts, to brainstorm new ideas and initiatives, to plan and carry out various Vocations related events and efforts, and to help build diocesan collaboration and financial assistance in the effort to build a culture of vocations.

Quarterly meetings.  Total membership not to exceed 15 and will include:

Deacons will be asked to take an active role in identifying and encouraging young people to consider a religious vocation, and in inviting them to discernment groups and retreats.

Teams of lay people will be established or built up within local parishes to build and promote a culture of vocations in their area, in collaboration with and in support of the efforts of the Diocesan Vocations Office.

The Vocation Director will work closely with campus ministers throughout the state, planning various vocations-related events and gatherings and regularly attending other events and activities on college campuses throughout the state.  Campus ministers will be asked to take an active role in identifying and encouraging young people to consider a religious vocation, and in inviting them to participate in discernment groups and retreats.

Youth ministers will be engaged by the director of vocations on parish visits, and at additional youth ministry events over the course of the years.  Information about religious vocations and discernment groups and retreats will be distributed through them to young people throughout the state.  Youth ministers will be asked to take an active role in identifying and encouraging young people to consider a religious vocation, and in inviting them to participate in discernment groups and retreats.

During regular visits to Catholic schools in the diocese, the Vocations Director will work closely with principals and teachers in building a culture of vocations.  The Office of Vocations will develop and distribute age appropriate vocations-related curriculum and will be a resource to teachers throughout the year.  Materials will be distributed to help schools observe and celebrate vocations-related days and events throughout the year.

Knights of Columbus Councils and Other Lay Associations

Knights of Columbus councils and other lay associations will be encouraged to commit to financially and spiritually support and encourage a seminarian and to demonstrate a commitment to supporting vocations to the priesthood and the work of the Office of Vocations.

Individual lay faithful will be encouraged to support and collaborate with the Office of Vocations through their dedication in prayer, volunteering of time, and commitment of financial resources.

Over the course of the year, the Office of Vocations will work to highlight vocations to the religious life throughout the diocese by drawing attention to various vocations-related celebrations and events.  These include the following:

Through various forms of electronic and print media, the Office of Vocations will reach out to Catholics throughout the diocese using the following tools:

Parish Bulletins and the Harvest Magazine