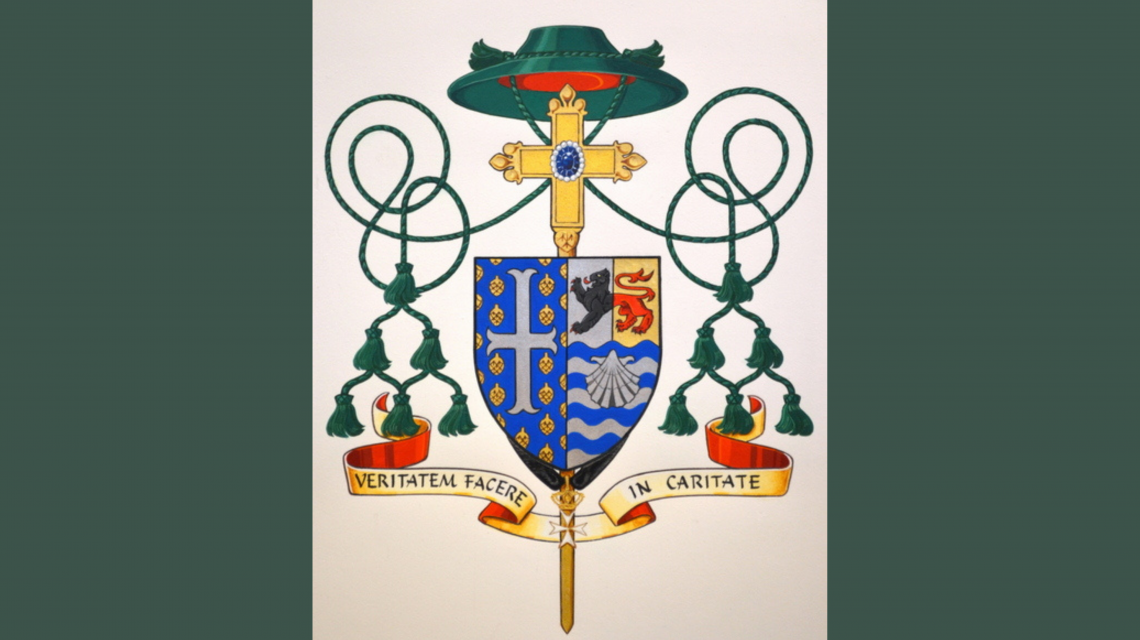 THE FORMAL BLAZON
of the heraldic achievement of
His Most Reverend Excellency
ROBERT P. DEELEY
Residential Bishop of Portland in Maine

Symbolism in the Achievement

of the Coat of Arms of the Most Reverend Robert Deeley

Residential Bishop of Portland in Maine

The design of the coat of arms of the Most Reverend Robert P. Deeley set out to achieve numerous spiritual and theological symbolisms important to him.  The design was arrived at several months ago in consultation with a longtime friend of Bishop Deeley's, the Most Reverend Bishop Charles J. Scicluna, who, in 2012 at age 53, was named the Titular Bishop of San Leone and auxiliary bishop of Malta. The use of the two metals, silver and gold, honor the Holy See as these form the colors of the flag of the Church and the Vatican City State.  Silver and gold, the only two heraldic metals, are known as the Heavenly Attributes in Catholic Heraldry, the reason why they were chosen to represent the Petrine Ministry.  Each metal appearing in the top field of the shield comprises one half of that field in what is known as a chief per pale.  Atop this dual field is found the lion which Bishop Deeley considers to be emblematic of his family.  In heraldry, this form of lion is properly known as a lion passant, which is split in half in the Deeley arms with the front half being rendered in black and the hindquarters in red, with the claws and tongue taking the opposing colors,  in what is described in heraldry as per pale Sable and Gules armed and langued counterchanged.

The top and bottom of the overall shield is divided by a wavy line to suggest water.  This theme continues in the bottom sector, continuing the use of wavy lines, alternating silver and blue, so as to suggest deep waters.  This division and field are known as barry wavy of eight Azure and Argent.  Upon this field appears a scallop, or pilgrim’s shell.  For Bishop Deeley this represents both the sacrament of Baptism and a special homage to Pope Benedict XVI who had raised him to the office of the episcopacy and to his home see of Boston.  The shell or scallop has been rendered in silver, which represents the purity of God the Divine Master.  Traditionally, in heraldry silver is exchanged for white as the actual metal sometimes tarnishes.  Bishop Deeley desired the formal usage of silver overall.

When news came that Bishop Deeley had been promoted to the See of Portland in Maine, his original design had to change once more by adding the impaled arms of the diocese to his own.  This impalement, the act of splitting a shield in half vertically with the diocesan arms taking the left side as one views it and the bishop’s personal arms taking the right, is symbolic of the marriage between a bishop and a diocese.

Beneath the shield is suspended the insignia of the rank of Chaplain in the Sovereign Order of Saint John of Jerusalem, of Rhodes, and of Malta, an office that the bishop has just this month assumed.

In heraldry, a motto has been a personal philosophy of life as well as a family dictum, and sometimes even a cry for battle. But in Church heraldry, a cleric's personal motto has always been intended to represent his personal spirituality and theologically based philosophy of life and is most frequently grounded in Sacred Scripture or in a prominent prayer or litany.  For Bishop Deeley, this symbolism is found in four simple yet powerful words:Veritatem Facere in Caritate, which translates alternately as speaking the truth in charity or doing all in truth and charity, taken from Ephesians 4: 15.  With this motto as his guide, Bishop Deeley undertook his episcopal ministry in the metropolitan see of Boston and, subsequently, in th Diocese of Portland.

There are external elements to every coat of arms design that must also be explained. This is also so in ecclesial heraldry. Surmounting the shield of both a Residential and Auxiliary Bishop is the pilgrim's hat, the heraldic emblem for all prelates and priests of the Latin Rite of the Roman Catholic Church. For the rank of bishop, titular and residential, the pilgrim's hat is always worked in deep forest green.   For this rank and office in the episcopacy there are six tassels suspended on either side of the hat in a pyramidal style. The hat is properly known as the galero and the tassels take the name fiocchi. These cords (cordiere) and tassels are worked in the same hue of green and the interior of the hat is always rendered in red, and has been so for eleven centuries, red representing the clergy’s possible martyrdom for the vocation that they have adopted in life.

Behind Bishop Deeley’s coat of arms is found the episcopal cross.  For the bishops, this cross has only one horizontal arm.  The cross may be jeweled or depicted as plain and most resembles the processional cross commonly used in liturgies.  The episcopal cross found behind and above this coat of arms is worked in gold, and has three Fleur de Lys emblems emanating from it.  This is known in heraldry as the Cross Fluerity. This was chosen to bring further homage to the Blessed Virgin Mary, whose main emblem in Catholic heraldry is the Fleur de Lys, and yet, this inclusion came only after Bishop Deeley made it known that he would also like to honor the Blessed Virgin in a special way.  The Cross is worked in gold with a Fleur de Lys terminus and with a large multifaceted blue sapphire (one of the longstanding emblems of the Mother of God) at its center surrounded by pearls, the second stone used exclusively for homage to the Blessed Virgin Mary.  Bishop Deeley’s episcopal cross incorporates the particular symbolic references for the Blessed Virgin that did not appear in the design of the shield proper.  The cross herein has a double symbolic meaning as Bishop Deeley moves forward as the new Residential Bishop of Portland in Maine in that the Cross Fluerity, with the Fleur de Lys terminus, represents not only the Blessed Virgin but also France where the roots of the diocese began.

As the diocesan archives report:  “The Seal of the Diocese of Portland is composed of a field of blue on which is displayed a "scattering" of gold (yellow) pine cones. The coat of arms is based on the ancient French royal family coat of arms to reflect the fact that the first attempts to settle what is now the state of Maine were made by the French under Pierre du Guast Sieur de Monts, who received a royal patent from the King of France and planted a small colony on Montreal (St. Croix) Island in the St. Croix River in 1604. In this design, the gold fleur-de-lys of the French royal family coat of arms has been replaced by gold (yellow) pine cones to reflect that Maine is ‘The Pine Tree State.’  The coat of arms of the Diocese of Portland has been in use since the diocese was erected by the Holy See in 1853.”

The Pine cone has been added by the bishop’s heraldic designers to the base of the episcopal cross as well to pay homage in the overall design to his new home state, Maine.  It can be found subtly supporting the cross atop and behind the bishop’s coat of arms.

Overall, Bishop Deeley’s episcopal coat of arms has remained faithful to the style of Church heraldry originally developed in the Middle Ages.  It is this ancient style that the Church continues to demand in the seals of office of each diocesan bishop, and of the co-adjutors and the titular bishops as well, whose seals traditionally derive from the design of the personal coat of arms.

ABOUT THE HERALDIC DESIGNERS

James-Charles Noonan, Jr. is a well-known Church historian and ecclesiastical protocolist as well as one of the few Vatican trained heraldists at work today.  He routinely works with the Holy See, with members of the College of Cardinals and the episcopacy. Noonan has published numerous books on these subjects, in the United States and Europe, including the bestselling opus The Church Visible: The Ceremonial Life and Protocol of the Roman Catholic Church (1996) which is being revised and updated for publication in May 2012.

He holds several academic degrees and is an alumnus of numerous prestigious institutions in America and Europe. He has also been highly decorated for his achievements, having received nine orders of knighthood from foreign heads of state, royalty, and from the Vatican.  Trained in ecclesial heraldry by the undisputed leaders of this field of study, namely the late Archbishops Bruno B. Heim, the private secretary of Pope John XXIII whose arms Heim designed along with the papal arms of Paul VI, John Paul I and Pope John Paul II and H.E. Cardinale, papal diplomat, author and heraldist, as well as the late Cardinal Jacques Martin (Prefect of the Papal Household during three pontificates), Mr. Noonan is now recognized at the leading Catholic heraldist of our own time. His select clients include cardinals, archbishops and bishops, and he has designed arms for basilicas, cathedrals, seminaries, shrines, and for abbots, priors, priests and minor prelates the world over.  Mr. Noonan resides in Gwynedd Valley, Pennsylvania.

Linda Nicholson, who expertly paints the heraldic arms designed by James-Charles Noonan, Jr., completes the partnership of this unique team in Church service. Nicholson's talented renderings complement Noonan's rich designs. She is a Craft Painter of the prestigious Society of Heraldic Arts in England and paints grants of arms for the Governor General of Canada.  According to Noonan, "Linda Nicholson is one of the great heraldic painters of our time and one of the few remaining experts in this craft". In addition to her artistic talents, Mrs. Nicholson holds a Master's Degree in Medieval Studies from the University of Toronto.  She resides in Ontario.